How Much of Success is Up to You?

How Much of Success is Up to You?


Goals, goals, goals. You've heard it once, you've heard it a million times on how setting goals, being committed, believing in oneself, and taking massive action are the keys to being successful.

There is one problem with this…


I know many people who have done all four of those things and did not become successful (as they defined it). Don't you?


One reason why goal setting has stolen the spotlight in recent decades and has been popularized by motivational leaders such as Zig Ziglar and Tony Robbins is the 1953 Yale Study. 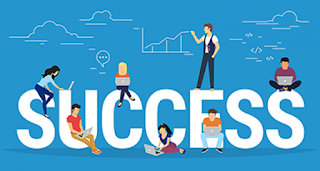 The study went as follows. In 1953, researchers asked how many graduating seniors wrote down specific goals for their future. After 20 years, the researchers followed up with this graduating class and discovered that the 3% who had written down goals were financially more successful than the other 97% of the class combined.

So maybe the secret sauce to success isn't actually goal setting after all.

Human beings tend to underestimate or overestimate the amount of control they have in the world and this relates to reaching the goals. This is known as the illusion of control.

I am sure you have also met people on either side of this control spectrum. Perhaps, you see yourself in one of these categories below.


Starting to critically analyze what things you do have control over and which things you do not when it comes to your success is extremely practical.

At the end of the day, there are absolutely actions we can take to make progress on our goals and the final result it isn't totally up to us.

Let me give an example.

I am a singer. When it comes to my singing career, there definitely are things I can do, things I can control. I can take voice lessons, write songs, perform those songs, record, get a band together, tour, release an album, but I can't control how the world receives that music.

I just can't. Even if I spend years, ten thousand hours, on my craft, I can't control if people like my music or even how many people hear it. Can't you think of a remarkably talented person, who isn't famous or a professional right now? Skill alone is not a guarantee of success.

The bottom line is that our lives don't happen in a vacuum, we are part of an ecosystem filled with many other people and many possible situations outside of our control.

So am I saying goals are bad? Don't set goals.


But when you see goals for what they are and what they may actually deliver, there is a lessening of pressure that promotes greater creativity, freedom, and enjoyment of the whole process.

Ask yourself, what do you think achieving this goal will fundamentally give you?


When it comes to personal goals, people often set them because they believe the achievement of the goal will result in some lasting positive feeling.

I meet people who want to lose weight because they believe it will lead to a permanent boost in self-confidence. (I was guilty of this one in the past too!)

I meet people who set a goal to get out of debt goal, truly believing that once they get out of debt, they will feel at ease with money and more secure. The reality is when they do reach their financial goals, then they become afraid to lose it only continuing the feelings of stress and anxiety around money.

When we are unaware of:

We can easily fall into the trap of the Hedonistic Treadmill. This is the tendency for our expectations tend to rise when we achieve previous goals.

For instance, the millionaire wants to make 2 million next year. The person who lost 15 pounds, just wants to lose that last 5 pounds. Only then will she "be happy."

I've seen people become addicted to goal achievement itself! When they finally achieve their goals in one area like weight loss, they immediately look to other areas of their life that they are unsatisfied with (such as career, relationships, or finances) and begin tirelessly working on those new goals.


In this way, success and goal-setting can become an endless hamster wheel, a rat race onto itself.

Before I go, I will leave you with this. Question the story around success, what it is, and what it actually provides.

There is no set definition of success. Success varies from person to person. Success doesn't happen in a vacuum, without any help from other people. (Even the most financially successful people in American history had help. They had gatekeepers, mentors, business partners, distributors, and customers who contributed to their successes.)

Success is not a predictor of happiness.

Nothing external, no goal, can ever cause permanent, positive feelings. Our state-of-mind is always changing regardless of circumstances and when we wake up to this, it can be ironically liberating.

So have fun out there with your goals...but perhaps you don't need to take them so seriously? ;)

Another positive emotion may be just around the corner, regardless of how far away from the success you think you are.